It's not really a new problem, in fact it's probably one of the oldest as far as computer hardware is concerned: the interconnections in our computers are often all too slow.

Interconnections are everywhere; they send information between computers, between motherboard components, between the motherboard and CPU, and even in recent years between individual CPU components. Currently, the interconnection technology maxim can be summarised as, "bring lots of copper, son".

Unfortunately, this technology is limited by the laws of physics; signal loss dependent on the length of the bus, possible desynchronisation if the bus is too long, electromagnetic interference between the bus tracks... and this is only getting worse with the increasing frequency of buses. Eventually, their flow will no longer be able to increase any further.

However, Intel as ever has a solution to this difficult problem, and it is once again optical fibre that comes to the rescue. The prototype converts electrical signals to light and sends them over optical fibre using four lasers of four different colors. Upon arrival, the photons are converted to electrons to be used by the electronics, resulting in no electromagnetic interference.

This type of connection can already achieve a throughput of 50 gigabits a second, according to Intel, and could easily go up to 1 terabyte a second through a single fibre. Some such technologies already exist, but according to Intel they are too expensive and cumbersome to be used in personal computers. By using multiple colours and multiplexing the light signals, the fibre is able to operate at its maximum possible throughput.

And so the baby of Intel is born; Light Peak, a true bridge between the worlds of silicon and light. With this type of converter and a minimum of latency, the signal can travel at speeds of up to 10 gigabits a second. The potential benefits are obvious: on a motherboard, most of the space is used for connecting peripherals; the problem of clutter would be remedied somewhat by smaller connectors (as opposed to, for example, PCI-Express x16 slots). Between the processor and the motherboard, the connection would also benefit from simplification of the socket design. And what about inside the CPU? Why not make miniature versions of this system for them? Some years ago, IBM worked on a similar technology. The production of massively parallel processors was the price and the result of that endeavour.

For folders especially, Light Peak is a technology to keep an eye on. Applications in general are becoming much more multi-threaded in nature, and any technology which reduces synchronisation time between CPU cores and threads will be especially welcome in Folding@home.

The subject is so vast and promising that Intel has made a very catchy little video to introduce the principle of fibre optic communications, as well as some possible applications.


Source: PC Inpact (in French)
At long last, the first mass-marketable fuel cells have finally arrived. An American company, nuMeridian, has released them in a new range called "Horizon", composed of three elements: the Minipak, Hydrostik, and Hydrofill.

The main product is the MiniPak, which is a portable charger the size of a 2.5" external hard drive, and is capable of delivering 400mA at 5V to any device. This is roughly the same energy charge as is provided by a USB 2.0 port, so is good for powering/recharging an MP3 player, mobile phone, external hard drive, etc. 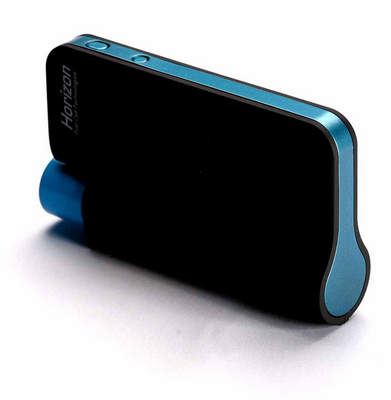 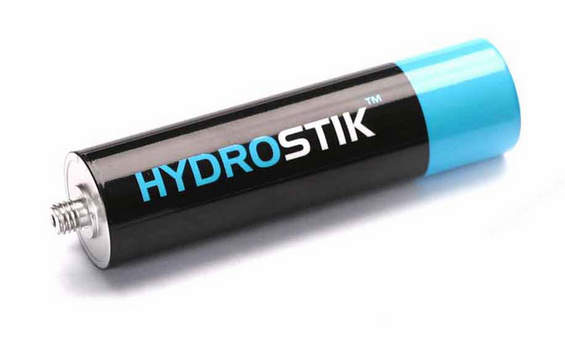 As for recharging, this is what the Hydrofill is for, an electrolytic cell that generates hydrogen from water. It weighs 1.2 kg, so can easily be transported if need be. The manufacturer is looking into combining the technology with solar panels, in order to start a small green trade on the side. 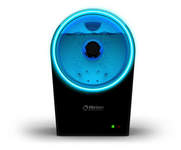 For the time being, the cost of the technology is rather prohibitive; one Hydrostik costs $10, a MiniPak $100, and a Hydrofill $500. At $620 for a complete system, and taking into account that the Hydrofil operates for a maximum of 1000 hours, and each Hydrostick has a maximum of 1,000 recharges, this is a somewhat costly system still, as is typical with green technology these days. For now, Alkaline and Ion Litihum technology still has the edge.
ST Microelectronics has announced a product that may well turn out to be a small revolution in the world of eye care. Previously, establishing a successful diagnosis of glaucoma was rather difficult. But why? 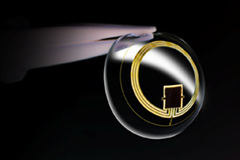 With the advent of a new technology, those days could now be numbered. ST Microelectronics has showcased a new form of tonometer, in the guise of a contact lens. Embedded in the lens is a measuring device, and an antenna to transmit the gathered results by radio waves. The lens can be worn for extended durations, in order to detect and measure peak pressure on the intra-ocular nerves.

With this technology, the process of screening for glaucoma would become far more effective, and significantly reduce the number of people that go on to develop blindness, as they can be treated at an earlier stage than might otherwise have been possible due to lack of a diagnosis. 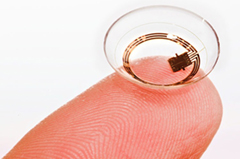 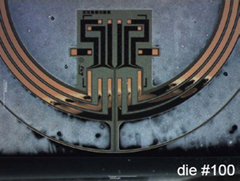 Source : ST Microelectronics
Researchers at the University of California Los Angeles (UCLA) have published some interesting work on the future of semiconductors. Their work could give rise to a new class of semiconductor in the form of a dilute magnetic semiconductor (DMS).

Researchers have used germanium on a silicon P-type substrate on which to create the quantum dots needed to control the spin of electrons, which are then carried by a magnetic field. It is this modification of the electron spin which will carry information (memory) or change the properties of the ferromagnetic component (transistor).

This method has two advantages over previous technologies; the first is that germanium and silicon are already used in the production of current chips, which makes it far easier for manufacturers to adapt their current production tools appropriately. The second is that as the electron spin is in a quantum state, its configuration and information state does not change in the presence or absence of electrical power. As a result, these chips should not require any form of standby or power-saving mode.

It now remains to make functional chips, in order to move beyond the laboratory stage. This is a new avenue of research, so it's unlikely that there will be anything marketable within five years or more.

Source: PhysOrg
A team of Israeli scientists led by Professor Yair Ein-Eli have developed a battery with the potential to revolutionise this apparently dull but crucial field.

Using silicon and oxygen, two abundant and non-toxic substances, the battery as tested had an endurance of 1000 hours. The battery has the advantage of being lightweight and has some resistance to humid and extremely dry environments.

Its creators primarily see it as a long term solution to powering pacemakers or automatic insulin pumps for diabetics. The batteries are considerably smaller and lighter due to their design lacking a built-in cathode (the cathode is oxygen in the air surrounding the battery), hopefully leading to even smaller mobile devices/more space for features within them.

The scientists, who kept quiet on the operation of their battery, published their research the journal Electrochemistry Communications in October. They reckon that within 3-4 years we could be seeing these batteries powering devices such as mobile phones or laptops, and that within 10 years we could see these batteries in cars (though hopefully something a little more inspiring than the hateful G-Wiz of today).

It isn't our custom to publish news off the usual beaten path of Folding@Home and computer tech, but today we'll make an exception. We now turn our attention to solar cells and other renewable energies.

The Japanese company Sharp has announced that it has developed a photovoltaic cell with a performance rating of 35.8%. This is a new world record in performance, without the use of concentrated solar rays.

Although germanium layers are very simple to fabricate, half of the electricity that appears in this layer cannot be used, and thus loses currents. Researchers at Sharp have therefore come up with the idea of replacing the material of the gallium-arsenide-indium with a much more effective combination. The new cell is composed of a layer of gallium phosphide, indium (InGaP), an intermediate layer of gallium arsenide (GaAs) and a lower layer of gallium arsenide, indium (InGaAs). The performance of this cell reached 38.5%, compared with other cells that have capped at 31.5%. This efficiency can be increased to 45% by using a concentrated light magnification of 1000.

Other features of the cell are:


These cells will be used initially in satellites by 2012. We are still far from the kind of returns from other energy sources, but progress is very real, and we hope to eventually yield enough solar energy to fully power our machines... and maybe even more besides.

Source: Bulletins Electroniques
Considered a pest, disease carrier, and parasite, the Tick is not very fashionable.

However a team of researchers at the Butantan Institute at Sao Paulo in Brazil have discovered an unexpected beneficial side effect in Tick saliva. The protein in Tick saliva - which has been nicknamed "Active X Factor" - has been administered to animals with various cancerous tumours. The results are amazing: after 14 days of treatment cancerous growth stopped and after 42 days of treatment the cancerous growth was gone! The team is currently patenting this system with a view to testing on humans and maybe a release to market if tests are successful.

If that happens then sadly your PC is a big loser in the fight against cancer... to a parasite that is a few millimetres long! Frustrating...