More statistics
Peter Kasson has added project 6040 to the list of SMP2 projects.

This represents an increase in the system load for SMP2 projects, evidenced in the number of atoms contained within this new project: a grand total of 330,706. Most of the projects thus far have contained around 75,000 atoms, projects 6011 and 6013 being exceptions at 146,000 atoms each. This is not a sufficiently large number of atoms for the project to be classed "bigadv" (the current A2 bigadv units contain over a million atoms) but it is a step closer to bigadv units for the A3 core.

This project examines in detail the substance known as hemagglutinin. This protein is responsible for setting the flu virus upon potential host cells. 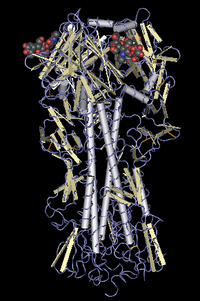 In order to fold these new units, version 2.17 of the A3 core is required. The core should be updated automatically upon receiving one of these units, if it hasn't already through another project.

Along with the increase in the number of atoms, you will notice an increase in the amount of memory consumed by the core. The memory usage may rise to 375MB with the -smp 8 configuration, and 300 MB with the -smp 4 one. It will also require an additional 60MB of disk space when outputting the unit results. Judging by initial observations, these units can be folded to completion in less than a day on a Core i7 processor, and within one to one and a half days on a Core 2 Quad or Phenom II X4.
Suggestions :
GPU3 in public beta within the week New Protomol projects: 10009, 10012-17, 10019-20
You are not authorized to post a comment
KOS-MOS
Member

Guessing my i5 will crank those out pretty happily...My poor old Opteron 185 might have it's work cut out for it though. Interesting info, nice to get a bit of a picture of what we're doing here.

And the best part of it is that it's not April 1 anymore, so no disinformation unfortunately