For Intel, CPU heat dissipation is becoming increasingly important. The Core i9 Gulftown - despite its 32nm die - is a monster with 6 cores, promising a good deal of heat dissipation.

To ensure the good stability of the systems that will be sold soon, Intel has decided to revolutionise the design of its Radbox. They propose for the first time an aluminium tower - with the exhaust fan mounted on the side - and copper heat pipes, a design that is now very common among other manufacturers of cooling solutions. 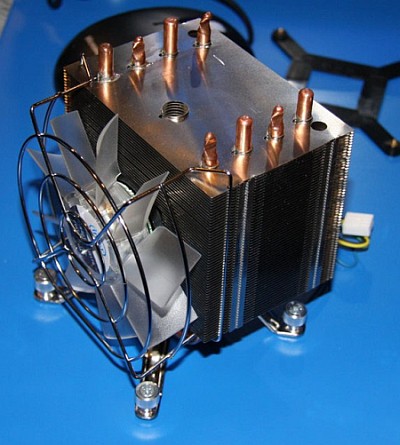 nVidia has released version 191.07 (WHQL) of its unified drivers for the GeForce range of cards. New in this release is full support for the ION platform, as well as the GeForces GTS 240, GT 220, G210.

For reference, an Atom 330 (1.6 GHz, dual core, hyperthreading) produces about 950 PPD. The ION platform GPU is more than able to play HD content in 1080p without a hitch; that's a small home theater PC friendly and very economical for your living room.

The driver is available for download at nVidia's site.

Source: Twitter nVidia and PC INpact
A good power supply should be durable and of good quality. Neglect it at your own peril. The proof...

In this post on the official Folding@Home support forums, Peter Kasson tells us that BigAdv projects are doing fine and produce interesting results.

More specifically, thanks to the results produced by first sets of projects, some scientific additions are being worked on to get the core ready fo the next set of projects in this category. This is the normal process of constant improvement of the folding cores. We will probably see these improvements in the next core update.

This is very encouraging and it suggests that BigAdv projects will continue in the near future.
Mark Friedrichs has posted a new version of the nVidia GPU2 core 11, aiming to fix the problems people have been having running multi-GPU systems with mismatched cards (mismatched shader count or boards from different generations). It also contains updates to the checkpointing system to prevent previous checkpoints left from old units from corrupting the current work unit.

This core contains all previous fixes and can be downloaded from here if you wish to dine in hell test it. It is version 1.31. Please only upgrade the core BETWEEN units as it is likely that the changes to the checkpointing logic will destroy all progress on the current unit if the switch is made mid-unit.

It is important to note, however, that they don't currently have enough bandwidth to realise the full benefits of the aforementioned technologies, but the performance increase will nonetheless be impressive.

It is expected that X58 boards will also have versions released which support USB 3.0 and SATA 6Gb/s.

The release date for the new boards is currently unknown.

According to BSN, nVidia has designed their new GT300 as a competitor to Intel's Larrabee. This GPU is codenamed "Fermi", which we shall be talking about in this article.

According to information from BSN, this GPU could be the GT300. We should have more information tonight, after nVidia makes its announcements during the opening ceremony of the GTC (GPU Technology Conference) exhibition.

Based on current information, the GT300 would have 3 billion transistors engraved in 40nm, or about 1.5 times more than the ATI RV870, which is at the heart of the HD5800 generation. The chip would have 16 groups (Shader Cluster) and 32 calculation units (CUDA cores), which makes a total of 512.

This chip should be capable of carrying up to 512 FMA (Fused MADD) instructions in one cycle in single precision mode, and up to 256 in double precision mode. The operating frequency of these units is still unknown, but there is great potential here.

The calculation units will be assisted by a 1MB L1 cache, which will be divided into blocks of 16KB each, and 768KB of unified L2.

The memory controller is composed of 6x 64-bits for a total of 384 bits, as with the previous generation chip, the GT200. These cards will be able to handle up to 6GBs of GDDR5. Remember that GDDR5 provides a mechanism for correcting computational errors, which will be promising as far as improving the reliability of GPGPU applications and Folding@Home is concerned.

The main innovation around this chip is the cGPU; within this abbreviation is hidden native support by the chip for many programming languages. Within, we find support for CUDA C, as with the previous chips, in addition to C++, DirectCompute 5.0, DirectX 11, Fortran, OpenCL, OpenGL 3.1 and OpenGL 3.2.

It is therefore possible to run any code programmed in any of the languages listed above, on the GPU, as is currently done with C for CUDA and DirectX. This is a serious competitor to Intel's Larrabee, which is without a doubt the main target of the GT300.

We now await confirmation of these features, as well as word on nVidia's game plan for 3D and intensive gaming support. We will probably know more tonight.

Hopefully, the chip will not be too expensive for ordinary users to afford. If so, then we will hold out on mainstream consumer versions becoming available.

Intel will be unveiling their Arrandale and Clarkdale processors in early 2010. These dual-core processors feature a 32nm die, and include both hyperthreading support and an integrated 45nm IGP core. Click here for our earlier article on Clarkdale.

The speediest of the desktop processors will be branded Core i5 670; the Clarkdales will sell at around $284 each, though bear in mind that this is the wholesale price for 1000 units, however the retail price is likely to be fairly similar.

The processors support Turbo mode, so will have the ability to run clock frequencies in excess of 3.46GHz. The socket interface is LGA1156, and the onboard cache stands at 4MB. The advent of these Arrandale and Clarkdale processors would appear to herald the beginning of the phasing out of the 65 and 45nm Core 2 Duo versions.

Contributor: KaySL
The first phase of Storage@home is nearing completion: the v1.03 client expired today at midnight UTC. It should stop automatically with a message indicating its expiry. You can then uninstall it by following the link Installation instructions.

There is some good news in that despite the small number of machines (a total of 170 machines registered and successfully posted data to the server), data collection was sufficient and Adam Beberg submitted his paper for publication approval. We will know in December if it has been accepted or not.

Stay tuned for news about the project.

ATI has won the PR prize of being the first company to produce a graphics card compatible with DirectX 11, effectively pasting their logo all over nVidia's prize chameleon.

nVidia has confirmed that their GT300 - codenamed "Fermi" - is under development and will support both DirectX 11 and OpenGL 3.1. Whilst the software support remains far from the concern of folders, our graphics cards are nevertheless primarily designed for gaming in our never-ending quest for photo-realism.

On the memory side of things, nVidia are catching up with ATI with the GT300, and are proposing to eventually support GDDR5 memory. Recall that GDDR5 supports an error-correction mechanism (as opposed to GDDR3) which should help to greatly reduce the number of unexplained GPU client miscalculations.