More statistics
SMP2 has greatly improved the efficiency of Folding@home in regard to memory usage, reducing its usage from gigabytes down to a few hundred megabytes of RAM. However if your machine has a limited amount of memory, what follows may please you!

Despite a major downward trend, DRAM manufacturers have massively overestimated the market for their products, resulting in an increase in inventories around the world. The memory type most affected is DDR3 (to be expected, as it is the current technology), it is trading at US$1.60 a unit and could fall as low as US$1.25 a unit (a 2Gb so 250MB chip), a decrease of 22%. The main cause of this decline in demand for RAM is considered to be increased demand for other forms of computer such as tablet computers replacing demand for PCs, which use different designs. This fall in prices cannot continue forever though, as there is already evidence that some chipmakers are moving their production capacity over to non-volatile flash memory for use in cell phones, tablet computers, memory cards etc. 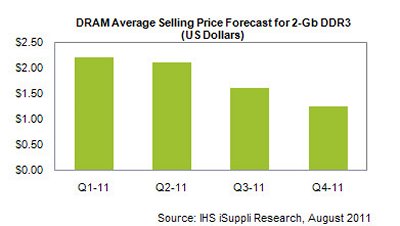 Source : ZDNet (in French)
Suggestions :
R.I.P. Socket 775 Dust, our old enemy finally defeated by MSI?
You are not authorized to post a comment