More statistics
In the world of graphics cards, there are broadly two categories. Cards for everyone, the normal person on the street, and technical showcases which are bought only in limited numbers but attempt to assert one manufacturer's superiority over the others. These two cards definitely fall in the latter camp.

The red side of the graphics card world, AMD, has come up with the Radeon HD6990. This card is codenamed Antilles and combines two of the Cayman chips previously seen in the HD6950 and HD6970 on one PCB. The card's ability to deal with the heat produced by the 6 billion transistors on the PCB will probably be the deciding factor on whether it is seen as a success or a flop. 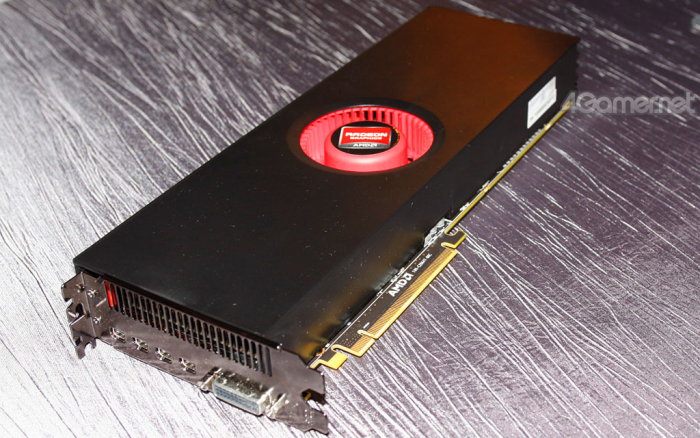 This card is physically a monster, to match the monstrous power hidden underneath that black shroud. At 30cm long, it will only fit in the biggest cases, and is a full inch longer than the other cards in its series (6950 and 6970). It requires both an 8-pin and a 6-pin PCIe power connector, for a total potential power supply of 300W (150W from the 8-pin connector, 75W from the 6-pin connector and 75W provided by the PCIe slot). As you can see in the picture, cooling consists of one centrally mounted fan blowing air in both directions. Regrettably this means that the heat output of one entire Cayman chip will end up being dumped inside the case, potentially causing trouble.

For connecting to displays, the card is equipped with one DVI port and four mini-DisplayPort connectors. Prices have yet to be announced, but can be presumed to be astronomical. Availability is given as the first quarter of 2011.

For those of you that prefer the green side of the world, nVidia has come up with the GeForce GTX590. This card contains two of the GF110 chips used in the GTX580, and as they remain unmodified this also results in a complement of around 6 billion transistors. The card will therefore have a total of 1024 shaders and 3GB of onboard vRAM.

The operating frequencies are unknown and nVidia has apparently decided to announce them at the last minute, probably to allow for increases if these are necessary to beat the HD6990. What we do know is that they will be considerably lower than the single-chip cards, as one GTX580 alone consumes 244W. It may be a good time to buy shares in your energy supplier if you wish to purchase this card!

Air cooling will be provided by a centrally mounted 90mm fan, in a design similar to the single-PCB variant of the GTX295. The GTX590 will be even longer though, potentially longer than the HD6990. As with the HD6990, the fan's placement means that a large volume of hot air will be dumped into the case so cooling could be an issue.

We do not have any images of the final card, but apparently it is scheduled to be available in February in an attempt to repeat the coup of the GTX580 and beat AMD to market.

One thing is for certain with these cards: the PPD figures they produce will be stellar, but the PPD/W figure will be questionable, with lower-end cards likely to do better on that front.
Suggestions :
The GTX560 Ti arrives priced at 229, let the price war begin! Xeon E7 (aka Westmere-EX) specifications revealed
You are not authorized to post a comment
muziqaz
Member

Well, nVidia hasn't come up with that card yet. All we seen so far was some leaked pictures from probably partners or something.
While AMD announced several times officially that they are planning 6990.
DaLoona
Member

Pffffft what a card, if you have enough of them, you can build a house with them.
Looks like a friggin brick and I'll bet that, IF, Nvidia brings out theirs, it will be just as big.
You are sure to have a warm home in the winter though XD, cause its not the electricbills that scares me, but its the heat and noise that thing will bring forth Im worried about, when doing 100%, 24/7.

Nope, even if I have the money, i'll stick with single gpu cards, look at the f@h forum and see how many have problems with their GTX295.
And to put this beast to use for f@h with current clients would be a waste of your money, since there are far faster, single gpu cards outthere, that leave this beast in the dust.
Elledan
Member

Sorry, someone had to say it

According to some Taiwaneese graphic card manufacturers there is a chance that GTX 590 could launch as soon as the end of February.