More statistics
We already know that Intel is preparing a Core i7 990x, although we do not yet have an official release date for it. Logically, an equivalent version will be coming in the Xeon range.

This new processor will be called the Xeon X5690, will have six cores manufactured at 32nm and will have HyperThreading technology. Its core clock speed will be 3.46GHz (26*133MHz) and much like its consumer counterpart, it will have Turbo Boost, limited to 3.6 GHz (27*133MHz).

Using diagnostics tools, some of which incorrectly identified the CPU as a Xeon X5677 as in the screenshot, we find that the CPU sports 12MB of L3 cache and a triple channel DDR3 memory controller. The processor also retains the 130W TDP of the "X" Xeon models. 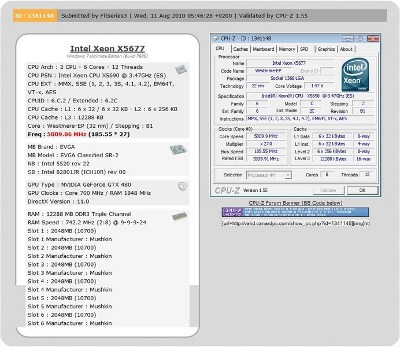 This processor should replace the X5680, which cost a somewhat prohibitive $1730 dollars per unit (for 1000 units excl. tax).

Source: PC World (in French)
Suggestions :
AMD Phenom II X6 1075T BE now available Westmere-EX: 10 cores, 20 threads, and up to 8 sockets!
You are not authorized to post a comment