While nVidia has thus far remained silent on any dual-GPU variants of its Fermi architecture, Galaxy has decided to set the ball rolling by displaying a dual-GTX470 prototype at Computex. 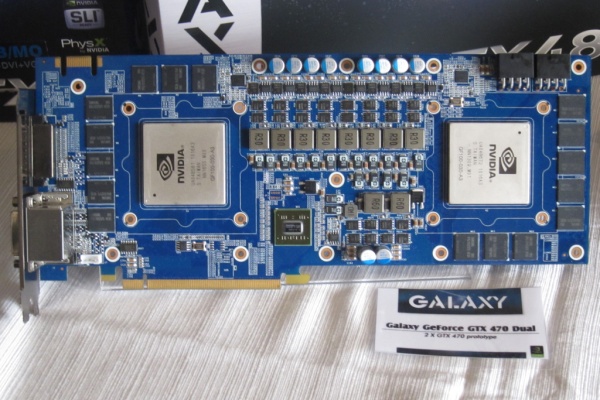 The card contains two GF100 chips with the ever-present NF200 interconnection chip, three DVI connectors and two 8-pin PCI-e power ports. The power supply circuit is particularly impressive (center of the card, between the two GPUs), but we must question whether this card will ever be stable, even capable of being quiet, and quite possibly the sanity of anyone that purchases one. This is because the TDP of a GTX470 is 215W, so two such GPUs on one board means a maximum total power consumption of 430W!

We have no details on the frequencies of any components, but it's probably a safe bet they will be somewhat lower than standard GTX470s. The board measures a full 30.5cm long, meaning it will have trouble fitting in all but the largest cases.

Source : Hot Hardware
Suggestions :
Radeon HD5xxx's equipped with NICs The GTX465, recognised as a GTX470
You are not authorized to post a comment
divery4eyes
Member

Maybe I dont know enough about motherboard design but to me this looks like it might need a motherboard support.
LOOK AT IT
this long of a card, with two of the hottest chips on the market, a heatsink(s) capable of cooling both chips, fans to blow? away the hot air, attachment for the fans, a shield to cover it all up.
If you thought the LGA 775 stock heatsink flexed the motherboard, wait til you install one of these.
warmon6
Member

As for the HSF, they'll probably just slap on there own custom cooler. example GTX 275 triple fan cooler, which is probably closes to what there going to use on it.
KOS-MOS
Member

Any way you look at it, it's sure gonna be sucking up the power. A bit of a shame in this day and age where we're supposed to be going green. At least the PCB's blue, there's no mistaking this as 'green' in any light.