We discussed it a few weeks ago, but nVidia has now formally announced the GTX465.

On the menu for this card, we have a hobbled GF100. This chip is already available as it powers the GTX470 and GTX480, but it will be cut down for the GTX465. The GTX465 loses a processing cluster compared to the GTX470, resulting in 352 processing units, 44 texture units and 32 Render Output Pipelines, compared to 448/56/40 for its big brother. The memory interface has also narrowed slightly from 320 to 256 bits.

Losing the cluster does nevertheless have one advantage: the TDP becomes a (slightly) more managable 200W (vs 215W for the GTX470).

For more information, we have a comparison chart which you can see below. 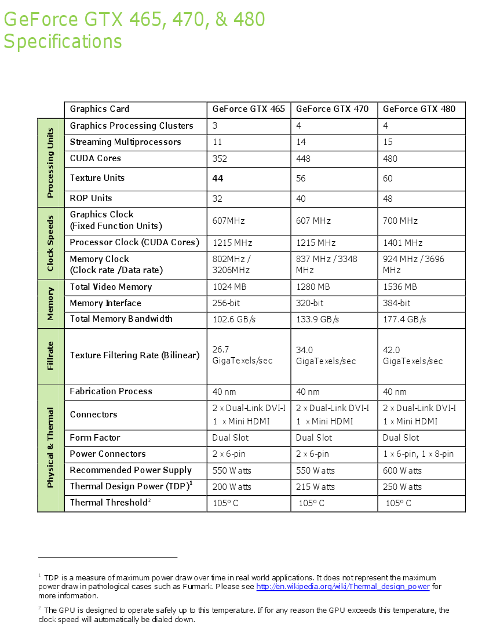 Performance in Folding@home remains to be seen, but this card could be the most cost-effective application of the Fermi architecture yet, at around US$279.

Source : PCINpact
Suggestions :
Intel finalises the Core i5 655k and i7 875k Rumours about a GTX460 from nVidia
You are not authorized to post a comment