Intel is continuing its research into Tera-scale computing, a project initiated by Larrabee, at the Intel Labs. Researchers at the Braunschweig, Germany site, have developed a processer with 48 cores. It is a prototype but is already functional. 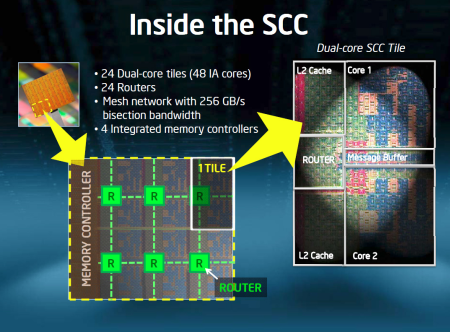 The processor is built on a 45nm process and includes 1.3 billion transistors (for comparison, nVidia GT200 has 1.4 billion and GT300 is expected to have about 3 billion) with a total surface area of 576mm². It consists of 48 IA32/x86 cores based on a modified P54C design used in the Larrabee chip and Atom processors, in the form of 24 dual-core packages. Each package also contains L2 cache and a box labelled Message Buffer for direct message transfers between the two cores. The execution cores in the current prototype do not support 64-bit operations.

For this chip, Intel chose a particular approach. The chip can be regarded as a set of servers, such as we see in applications such as cloud computing, but miniaturized into a single chip. Communications between the cores take place within a TCP/IP ultra fast mesh network and applications can quickly and dynamically adapt their demands for the cores. Intel has given a logical name to the prototype given its features: Intel Single-chip Computer Cloud.

The chip also has four DDR3 memory controllers supporting a total of 32GB of RAM, and power consumption is quoted as 25W at idle and 125W loaded.

Intel did not provide raw performance figures or demos of the chip: only time will tell if we find derivatives of this prototype in our home machines or if the idea is abandoned.

Source : Clubic
Suggestions :
AMD changes its steppings; undervolting in sight! Larrabee cancelled... but the project continues
You are not authorized to post a comment