nVidia has officially announced its new Tesla cards based on Fermi.

Current information is still limited, but the main difference between these two models is that of rated memory: a 3GB model for the C2050 and 6GB for the C2070. In both cases, the onboard memory is GDDR5, and supports ECC. The theoretical power of the card varies between 520 and 630 GigaFLOPS along with double precision and a maximum power consumption of 225W.

No clock frequency has been announced yet, but early speculation speaks of only 1 to 1.2GHz processor speed. It seems that nVidia has so few problems that they need not raise the frequency of the some 3 billion transistors that make up the chip. 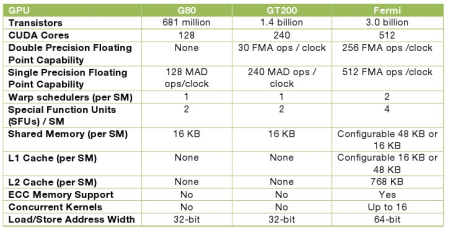 There are two disappointments: firstly, the availability of the cards is planned for 2010. Secondly, nVidia has still not made any announcement regarding the consumer market, merely saying that GeForce based Fermis are expected sometime in the first quarter of 2010.

Source: PCINpact
Suggestions :
The GeForce GT240 discreetly arrives AMD changes its steppings; undervolting in sight!
You are not authorized to post a comment