Today, the new generation of ATI graphics cards was announced. Or should we say AMD graphics cards, the first time this designation has been officially applied. The cards in question are the Radeon 6850 and 6870. 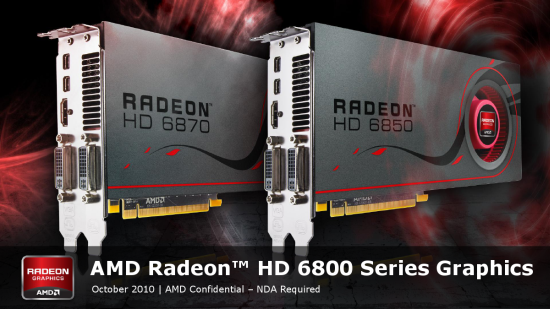 While being classified as x8xx cards, you'll quickly see that the cards would fit better in the 6700 range; while these new chips have an increased number of stream processors compared to the HD 5750 and 5770, yet remain below what is offered with the 5850 and 5870.

In addition, as with the 5700 range cards, AMD has opted not to include support for double precision operations with the 6800s. This won't pose any problems for GPU folding, but may prove disappointing for users of other GPGPU calculation programs.

On the architecture side, AMD retains its 5-dimensional vector calculation units; only one component is able to handle complex functions (such as sine, cosine, division, logarithms, etc.). The other four are limited to simple functions such as addition, multiplication, and multiplication combined with addition (MAD). This architectural flaw adversely affects the performance of complex calculations such as those used by Folding@home. Fortunately, this type of architecture is otherwise very effective for 3D rendering, some BOINC projects, and simple mathematical operations.

The GPU powering the 6850 will feature 960 computation units, while the 6870's will feature upwards of 1120. Clock frequencies seem set at around the 775MHz mark, and will of course vary from manufacturer to manufacturer.

A strong point for the cards are their reasonable prices; around €160 for the 6850 and €210 for the 6870, in addition to a reduced power consumption over their predecessors. A third pro is an efficient heat-management system, which allows for high utilisation without the noise to match.

ATI should be announcing their plans for new high-end cards in late November.

GPU folding with these cards will not be possible without a core - and probably also client - update. Core 16 and the v7 client, perhaps?
Suggestions :
GTS 450 and GTX 460; great performance, and more to come? GTX 580 rumours accumulate
You are not authorized to post a comment
Foldon
Member

Hmm... better get used to the fact that AMD x9xx-series will include all the high-end cards from here on.