To adapt and optimise the operation of GPU clients with the variety of equipment available, developers have included with environment variables for custom settings. These settings can influence the performance of core, stability or both. This article explains how to set these environment variables, and explains the parameters for ATI or nVidia.

Be aware that some variables are likely to disappear, or others may be added during the progress of development and optimization of the core. This article will be updated accordingly.

This part was written using Windows XP as a base, but the philosophy on Vista and Seven will remain the same, only the titles of the menus may vary slightly from one version to another.

Several methods exist to open the Control Panel item that interests us:

Once the System Properties window is open, go to the Advanced tab and click Environment Variables. Here is the window that appears: 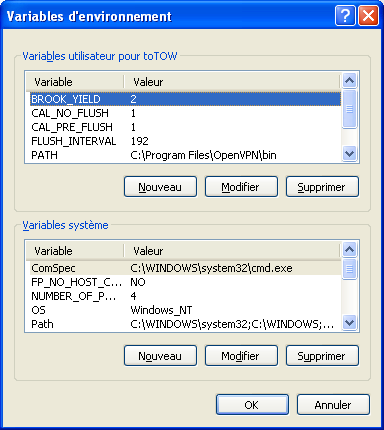 In this window you can see both sides. The upper part called User Variables only applies to the current user. The variables set here apply immediately to the current user and a simple restart of the Folding @ Home client is enough to take them into account. If you use the client service mode and / or you have multiple users on the machine, this is not the right solution to set your variables. If you are the only user of your machine, it is the simplest method to configure your variables.

The second part of the window, is called System variables. The variables set here apply to all users of the system, but a reboot is necessary to take into account the changes.

Regardless of where you set your variables, keep in mind that names are case sensitive: VARIABLE_ENV is not the same as variable_env ... Do not get trapped.

To check that your variables are set, run a Command Prompt (Start> Programs> Accessories> Command Prompt) and use the command "echo %variable_name%" ... when the variable is properly configured, the value is displayed, otherwise variable_name%% is returned.


Now that you know how to configure the variables, here is the list of possible configurations and their meanings.

These variables require Core 11 v1.24 or later and Catalyst 9.3 or later to work.

FLUSH_INTERVAL is what will affect graphics performance (the 2D lag phenomenon for example). This is the number of functions sent to the GPU in one go. The GPU will not do anything else, including refreshing the screen until processing of the batch of commands ends. A low value reduces the time F@H monopolises the GPU, and the response time of the interface increases. However, the lower the value becomes, the higher the CPU load related to the OS and the driver becomes, so there is a trade-off between the performance of F@H and the fluidity of the interface. If the batch is too large, it can cause a VPU Recover, the driver thinking that the GPU has hung (when it is just taking too long to respond).

BROOK_YIELD has several modes: 0/1/2. 0 will monopolise the CPU to have the lowest latency to requests from the GPU. 1 will release the CPU while waiting for response from the GPU to process all commandsof the same or lower priority than the GPU core. 2 will release the CPU for every process, regardless of its priority. Now, for very small values of FLUSH_INTERVAL and small proteins, it is likely that the GPU is almost finished when the CPU is released. The GPU must wait to regain access to the CPU, which may take up to a millisecond. A high-end GPU will complete most such batches in less than 100 microseconds, therefore the period of waiting for access to the CPU can have a big impact on performance. With a high value of FLUSH_INTERVAL, it is easy to build several milliseconds of work, making the wait period less of an issue.

Here is a sample configuration:

NV_FAH_CPU_AFFINITY is used to set the affinity of the core. It is not normally set up, unless you have trouble with program conflicts (performance degraded by sharing a CPU core with another program). Acceptable values are 0 to 15 (numerical values) ... this is actually a binary mask such that each bit represents a CPU: CPU3, CPU2, CPU1, CPU0. A value of 1 allows access to the CPU in question, and a value of 0 prohibits access. A numeric value 0 is the default: it allows access to all cores. If you use this variable in a custom configuration, it is recommended to enable the client option "do not lock cores to specific CPU" in the configuration.

Here are some examples for different values, as well as significant values:

FAH_GPU_IDLE is a variable that was introduced with the 1.26 core to help reduce the overheating of some cards with some WUs at the request of some members of the community. Its value corresponds to the rate of waiting time we wish to introduce into the core. For example, a value of 10 corresponds to 10% of waiting time. The decline in performance is not necessarily proportional to the waiting time: in fact, depending on the calculations, it may not be possible to maintain exactly the value requested. This value is a target, but in practice, the actual waiting time will vary around this value. If your card has problems with overheating, you can use this to find the value that suits you best to keep reasonable performance, while limiting overheating of your card.

Happy folding on the GPU.