More statistics
Del Lucent has been with the group since 2004 and has been working to understand how proteins fold in vivo (i.e. how they fold in cells and how that might be different than folding in a test tube). On the surface, this may not seem like something which is very amenable to simulation (it's easy to simulate a protein in isolation -- a good model for proteins in a test tube -- but really hard to simulate a whole cell). Therefore, we must put not all the details but what we think are the right details.


Del has been concentrating on studying how folding differs in the presence of chaperonins. 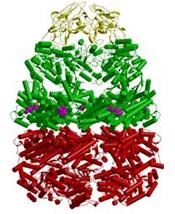 Chaperonins are pretty neat molecules (see the picture on the right). First off, they're HUGE -- made up of multiple proteins assembled together into a big container. Proteins go into the container misfolded and somehow come out folded. That's what we want to understand -- how do chaperonins help proteins fold? You can check out Del describing this in more detail on YouTube.

Del's first paper in this direction was recently published in PNAS (see http://folding.stanford.edu/papers.html -- his is #50). It shows some surprising results for simple models of chaperonins, but Del is now studying more detailed models. Del is also a part of our team studying folding in the ribosome (another part of the cell which makes folding in vivo different). Finally, Del is also interested in using his knowledge about chaperonins and folding to help develop new therapeutics for cancer (more specifically -- it turns out that chaperonins are heavily used by tumor cells as they are growing so quickly and coming up with ways to inhibit chaperonins has become an important new type of therapeutic to fight several forms of cancer).

Del also plays a major role in building Folding@home infrastructure, as he is the current "stats master" and he works tirelessly with other members of the group to make sure that the stats are right, and to improve them as we improve our clients (eg lots of changes for v6).

Copied from: Meet FAH Team member, Del Lucent (Vijay Pande's blog)
0 Note
You are not authorized to post a comment