Technically, this variable changes the behaviour of the core with respect to memory management for MPI processes. By default, the Folding@home core uses shared memory to exchange information between processes.This memory is a memory area not reserved for a given process, so everyone can read and write.

After activation of the variable, MPI uses a more conventional memory setup: shared memory is no longer used, with each process allocated a reserved memory space, and the exchanges are performed over TCP/IP (via the localhost in this scenario). MPI is used here in the way it was originally intended: the exchange of data between processes distributed over a network (i.e. a cluster).

Application of the variable

The application of this variable is very simple. Before you launch the client, you must type the following command, then run the client as normal:

The tests were conducted on the following setup:


Results before applying the variable 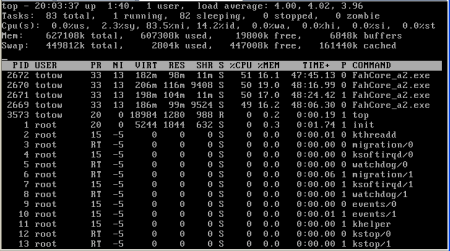 In this configuration, it would seem that the process is assigned to a core (column P is the core on which the process runs), and the other three processes share the second core.

Results after applying the variable 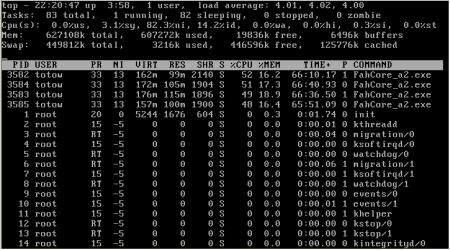 Here, the processes are properly distributed: two per core.

Finally, the gain varies between 28 seconds (3.5%) and 2 minutes 8 seconds (14.8%) per frame. The gain is significant, and the first tests by users seem to imply that performance is back to the level of core v2.08. Considering the simplicity of application, why deprive yourself?

Warning!This optimization has a downside: it will make the core sensitive to network events (disconnected cable/wifi, DHCP renewal etc) which can cause the core to crash and resulting loss of the WU. To avoid this problem on a machine connected via wifi it is recommended to use a fixed IP for your machine.
1 Note
You are not authorized to post a comment
raZor
Member

No, it's only for A2 core, which is only available on Linux and OSX ...
Weedacres
Member

If you've been following the 2.10 slowdown thread on FAH you'll see that this fix does not work on notfreds vm appliances (at least on the 3 I've tested it on). On 2 core machines it will only fold on 1 core after issuing export MPICH_NO_LOCAL=1. On 4 core machines 2 cores run at about 70% and the other 2 are idle.
tear is working to recreate this and try to come up with a fix.